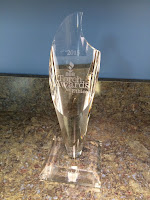 Typically we are humble people. We prefer to work in the background and not be in the limelight. However, this is one time that I have to brag a little. Yoder Concrete Construction, LLC, the leaders and employees, have received an award, and I have to tell everyone about it!

In 1994 the Better Business Bureau of Central Ohio began honoring local business leaders who exemplified the BBB mission of demonstrating their commitment to highest standards of leadership character ethics. Since that first year, twenty years ago, more than 80 central Ohio businesses and nonprofit organizations have been recognized by receiving the Torch award, originally called the Business Integrity Award.

A few years ago I attended a workshop on how to prepare the application for this award.  I learned that there were six principles that needed to be demonstrated on how leaders intentionally work to increase manifestations of their own high character and enfold their employees, customers, vendors and the community within that framework. It was a little overwhelming and I wasn't sure we were ready to apply.  Busyness got in the way, and time passed.

In April of 2015 I ventured to Columbus, Ohio, again to attend the Torch Awards for Ethics Clinic. Along with approximately fifteen other company representatives, we learned about the history of the award, criteria used for eligibility and judging, and the principles that were being evaluated. The Principles make up the word TRUST!  - Principle #1 Transformation at the "Top;" Principle #2 Reinforce and Build the culture of high character ethics; Principle #3 Unite the Team; Principle #4 Steer Performance within your team; Principle #5 Treasure People; and Principle #6 Enthusiastically Reinvest! in your community.  This time I felt we were much more prepared to tackle this opportunity.  I was also informed that the application process was now online, which sounded so much easier than preparing a physical notebook!  I was thrilled. 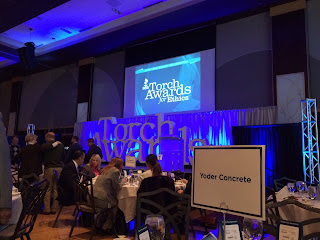 Part of the application process was asking others to prepare a testimonial to include in our submission.  I asked employees, customers, vendors and community leaders if they would be willing to write a letter that would state, in their words, our dedication to high ethics and commitment to people and the community.  I was overwhelmed at the response received.  It was very humbling to hear words of praise and encouragement from others. Instead of one letter for each category requested, I was able to send three letters for each because of the outpouring of our peers. I thank each one of them who took time out of their busy schedule to write letters on our behalf.


On Tuesday, October 20th, Jeff and I attended the 20th Anniversary Celebration of BBB Torch Awards for Ethics.  It was held at The Ohio State University, Ohio Union in the Archie M Griffin Grand Ballroom.  Four businesses and two nonprofit organizations received the 2015 Torch Awards for Ethics, and ten high school students received the 2015 BBB Students of Integrity award. I would estimate that over 250 people were in attendance for this luncheon. A video that had been prepared by the BBB was shown for each organization receiving an award. (You can view all of the recipients' videos on the BBB website.) We invited guests to join us and were blessed to have four of our peers at our table to celebrate with us.  I want to especially thank Scott Duff from Ohio Ready Mix, Debbie Hill Grimes from Bryce Hill, Hugh Gibbs from White Cap and Todd Hanes from Adriel for taking time to be there.  We appreciate the relationships developed over the years. 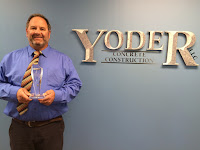 It has been a great journey working with my husband, Jeff Yoder, and building the company we have today. We look forward to continuing the legacy and impacting others through our faith, and will continue to strive for high character ethics in our personal lives and in the business. I love you, Honey!
~Roberta Yoder
Posted by Unknown at 11:37 AM 2 comments:

How much concrete will it take?

Promote Your Page Too

What are we talking about?

We can do custom stenciling in your concrete.